In December of 2021, GMercyU Professor John Gunn, PhD released his new book titled Perspectives on a Young Woman’s Suicide: A Study of a Diary with co-author David Lester, PhD. The book ties in the work of experts in suicidology and suicide prevention by combing through the diary of a young woman who died by suicide. The experts dive deep into the diary’s content by analyzing it from theoretical perspectives, prevention and therapeutic perspectives, and from the perspectives of individuals who have lost a loved one to suicide. Professor Gunn highlights that the goal of the book is to shine a light on such a complex issue. 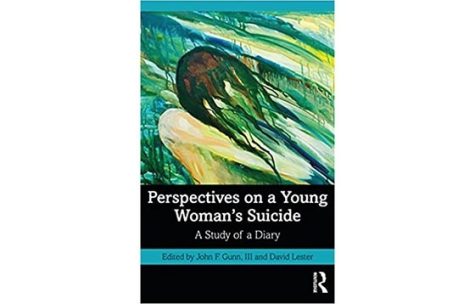 Connecting with David Lester, PhD
Professor Gunn and Dr.Lester have been colleagues for years. He describes Lester as “a prolific suicide researcher” and, as an undergraduate, Professor Gunn worked directly with him on his research. Since that time, the two have continued their relationship by collaborating on four books, including the one just released, and numerous articles.

The idea for Perspectives on a Young Woman’s Suicide: A Study of a Diary stemmed from a previous book that Lester had written titled Katie’s Diary in 2004. Since the publication of Lester’s book, there have been advancements in theory and science. As a result, Professor Gunn reached out to Lester asking if he was interested in writing an updated version of the book and Lester agreed.

Suicide, the Mercy Mission, and GMercyU’s Core Values
“I think the book aligns nicely with the Core Values of the University,” said Professor Gunn. The book promotes service to society by shedding light on the major public health issue of suicide. The critical concern of women is also addressed, as the book highlights some stressors that are of importance. Such stressors include negative messaging towards the weight of women as well as their body image. In the book, it is evident that Katie struggled with eating disorders and issues with her weight. Non-violence is another critical concern that is touched upon regarding the sexual and physical abuse that Katie endured.

Professor John Gunn, PhD earned his bachelor’s degree from Stockton University, his master’s degree from Rutgers University-Camden, and his doctoral degree from Montclair State University. Prior to his time at GMercyU, he worked at Montclair State University as an adjunct professor and at the New Jersey Gun Violence Research Center at Rutgers University as a postdoctoral associate. Professor Gunn’s research is organized into four inter-related topics and he is a member of the editorial board of Crisis: The Journal of Crisis Intervention and Suicide Prevention.

Your donation will support the student journalists of Gwynedd Mercy University. Your contribution will allow us to purchase equipment and cover our annual website hosting costs.

A chat about our student government association

Students of DigComCrew are Digital Communication majors producing content for the GMercyU community.  Learn more about this year's crew....

GMercyU's cheerleading team is now a club on campus.  First year head coach, Heather Kildruff, talks about the new team and plans for the future....

Check out the latest interview with Kyle Hartman, the ResLife director!  He talks about the cost, the fun, and the benefits to dorm on campus! This i...